Oz The GREAT and POWERFUL...Sneak Peek from Epcot! 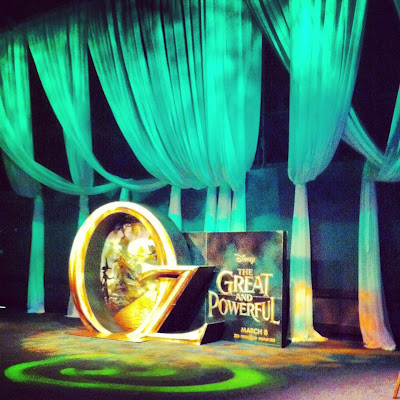 Rarely ever do the stars align for me that I would actually be able to attend one of the Disney Parks Blog Meetups. However, just a couple of days before I left for Princess Half Marathon Weekend, I was shopping along in Target when the tweet came through regarding the sneak peek of the new Oz The GREAT and Powerful Movie! As soon as I saw that it would be during the time I would visiting the Disney Parks, I knew I would be applying quickly! I knew that this would not just be "any ole" movie, especially if it was to be hosted by the Disney Parks Blog. Heck, they could give me a glass of water and just talk Disney all day and I would love it. So a sneek peek of the movie? YES Please!!
I do have to confess that I rarely go to the movies anymore, partly because I'm just too busy and don't like to sit still that long but partly because my hubby takes the kids and that's kind of "their thing". I don't really mind it because that means I get a couple of hours of quiet at home and that's not really a bad thing either. ;)
So I got the email confirming that I would be invited to attend and OH MY GOSH was I excited!!!I won't give out any spoilers on the actual movie but I will tell you how the meetup went down!
First we gathered and signed in outside of Epcot where we received a pass to enter in if we didn't have one already. We were told to meet at the "Barn doors" just past Canada in the World Showcase at 4:30. Movie would start promptly at 5:00.
I grabbed a quick pic with Goofy on the way in, rode SpaceShip Earth with lots of my Princess friends and then headed on over towards the World Showcase. On my way in, I wanted to take a little stroll through  the new Land of Oz Garden and see what that was all about. LOTS of jokes had been made about this garden all week long because I had been stalking out the Disney Parks Blog to try to get in on the RunDisney Princess Half Meetup. The page had been stuck on the article about the Land of Oz Garden for hours! And yes, it did just magically appear! ;) I didn't make it in to the Princess Half Meetup so this was making up for it for sure!! 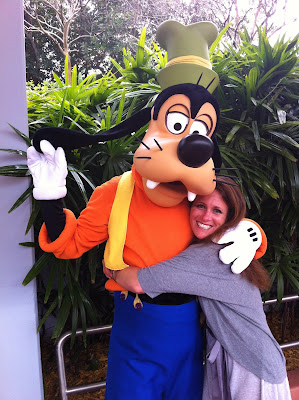 In all seriousness, the Land of Oz Garden was GORGEOUS and a fun little addition added in for the Epcot International Flower and Garden Festival. I took lots of flower pics and then decided I needed to go get my seat for the big movie 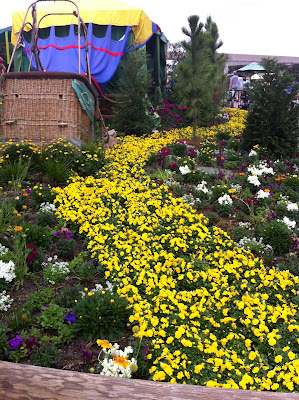 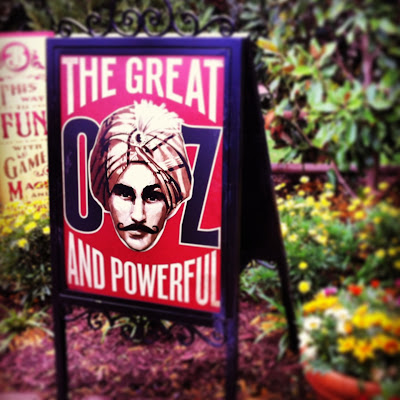 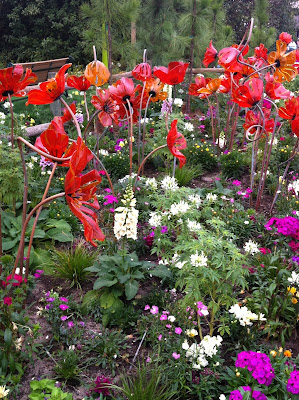 We waited in line for 15 minutes or so before they let us in. We proceeded to head in and then were asked to kindly hand over any electronic devices. OMG. No phones, no cameras, no battery chargers, nothing. We were about to be without these for at least two hours. WHAT?????  Bloggers and Social Media Junkies with no phones!!!! THAT's the reason that there are not a ton of pics from this event!

But with or without phones (I managed to snap a few quick pics on my way in), it was a really fun event. We were treated to some yummy delicious "Sweet and Salty popcorn, Pretzels, White Chocolate and Edible Gold" and "Flying Monkey Punch". The Disney Parks Blog team played lots of "Oz" trivia from previous movies with us, gave away some cool prizes and then we settled in to watch the movie.
I was pretty much exhausted at this point because after all, I had been awake since 2:30am that morning preparing to run the Princess Half Marathon. The movie was a much needed break and relaxer! I CANNOT wait to take my family to see Oz The Great and Powerful at the movie theater at home even though it will never compare to my experience in Epcot walking through the garden and then seeing the movie with the Disney Parks Blog team all while wearing my Princess Half Marathon medal. That's right, I wore it for the next two days at the parks! Seeing the movie with the fam will be a whole new experience, but just as magical I'm sure.  Last but not least...it was time for phone retrieval! Yippee!! :)
Goodnight from Epcot!! Go see the movie in 3D and enjoy...I know I did! 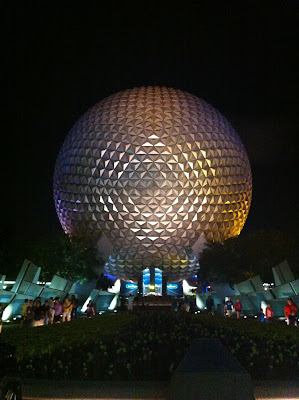